Well, who knew Delia Smith had it in her! According to her recipe, she’s a fan of a tipple or two. These tomatoes may look innocent, but they’ve actually been soaked in lashings of booze for 48 hours, absorbing a concoction of vodka and sherry. Essentially it’s a bloody mary, just without the mixer… serve with a drink and you’ll be away… literally:

Directions for use: Try not to force feed to someone who hates tomatoes…. Mr Mason please accept my public apology…. 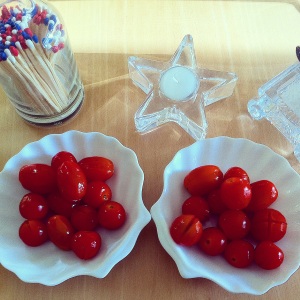